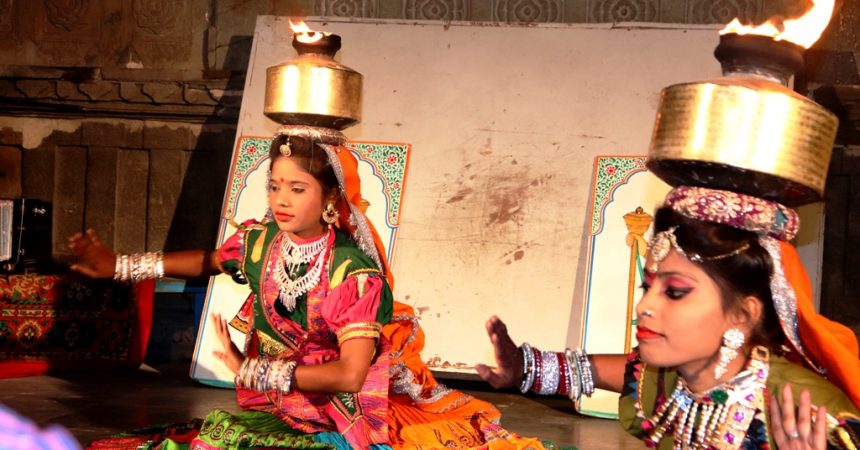 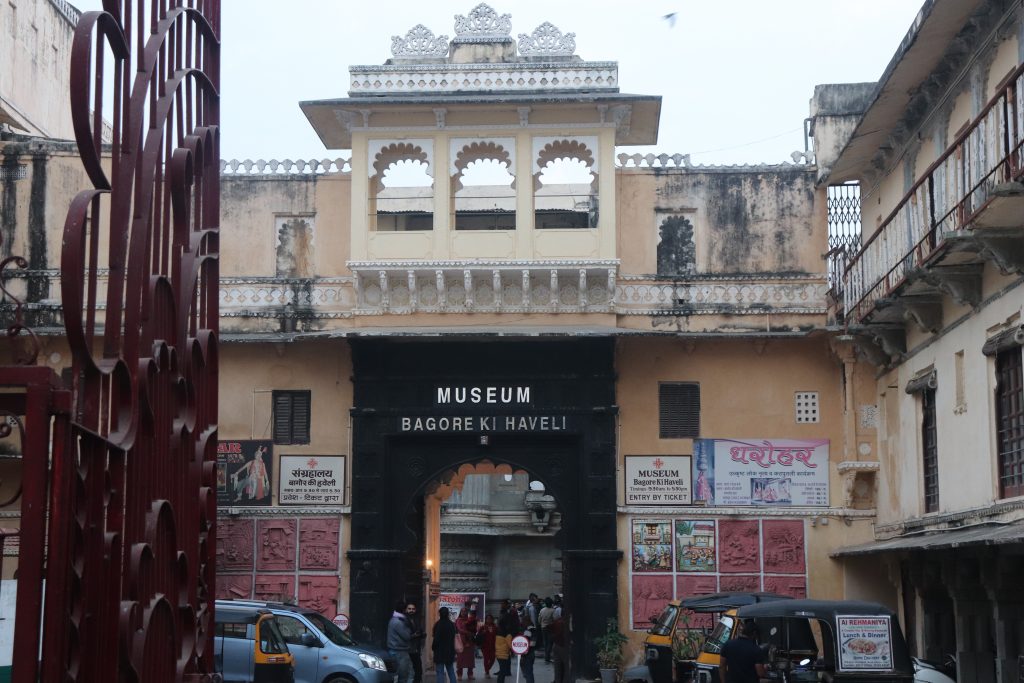 The front of the Bagore Ki Haveli

Bagore ki Haveli, Udaipur is an 18th-century royal architecture built by the then president of Mewar Mr.Amar Chand Badwa, the construction of this haveli lasted throughout the rule of the four Maharanas. It is situated on the waterfront of Pichola known as ‘Gangaur Ghat’ in the old city, Udaipur.’Bagore’ is a place in Rajasthan and ‘Haveli’ means ‘Mansion’ so the reason behind this name lies in the fact that the mansion became the home of Maharana Shakti Singh of Bagore so the name ‘Bagore Ki Haveli’ got popular among the locals. The palace was the private property of the royal family of Mewar, after independence Government of India used the building as the housing of the government employees but due to improper maintenance the property was assigned to the west zone culture center in 1986 which converted the property into the heritage museum keeping intact the look of the ‘haveli’.

The mansion consists of over 100 rooms, multiple corridors, balconies, jharokhas, and terraces. The royal queen’s chamber attracts everyone attraction with the splendid piece of art being showcased in the form of fine glass work. There are two beautiful glass peacocks in the chamber giving the testimony of the craftsmanship of that era. You will get introduced to the royal lifestyle in the form of bathrooms, dressing rooms, jewelry boxes, hukkas, pan boxes, rose water sprinkler and various other artifacts. The museum also has a great collection of puppets and turbans.

The Dharohar dance show is the main attraction of Bagore ki Haveli. The show takes place in the evening from 7 pm to 8 pm and showcases vibrant cultural dance and art forms of Rajasthan. It’s a must-attend show, you need to line up in the queue to get the tickets and grab you comfort seat first, the charges for the show is INR 90 for Indians and INR 140 for Non-Indians. The charges for carrying the camera is INR 150. We tried skipping the camera ticket in hope of some luck but you have to buy it as the ticket is in the form of a ‘wrist tag’ which you must wear while clicking or filming.

The ambiance is a perfect one for a cultural show like this, the lit up gokhdas(palace styled window) and balconies in different light make a vibrant background for the show. The structure is stone textured which gives it a rich heritage look. The musicians with tabla, harmonium, and Dholak occupies the right corner of the stage. The show starts with a ‘vedic manta’ followed by the extremely popular welcome song ‘Padharo Mhare Des’ which means ‘you are welcome to my land’, after that an anchor dressed in Rajasthani attire takes over the mic and explains about the different forms of Rajasthani dance prior each performance. She gives both English and Hindi explanations. The show started off with the ‘Chari’ dance, as the name suggests Chari means a small metal vessel, this dance is done by women of North Rajasthan with a ‘Brass Chari’ containing the fire on their head, the dance poses resemble the ‘Yogasana’. 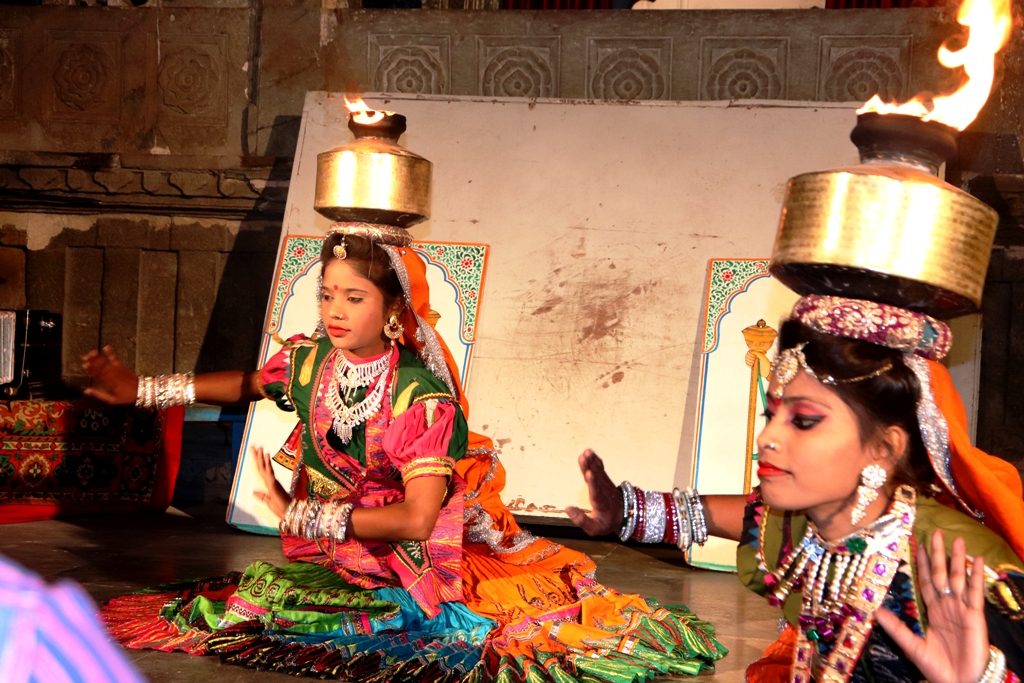 Next was a sparkling dance of Rajasthan ‘Gorbandh’, the dance portrays the joyous women celebrating after preparing a ‘Gorbandh'(a decorative piece to decorate the camel) for their camel. There is a tradition of decorating animals on Khekhra(the day next to Diwali). The dancers in the dance were colorfully dressed in sparkling jewelry and bangles. There was also a mini puppet camel dancing in the background which further enhanced the beauty of the dance. 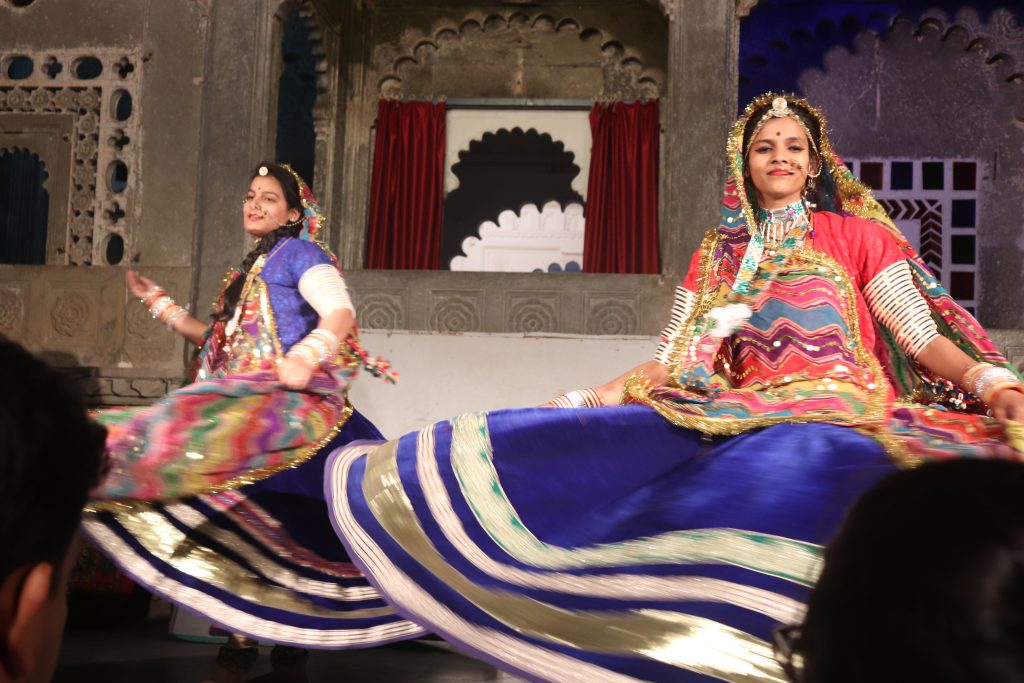 Next followed the ‘Gavri’ which is the local dance drama of Mewar dedicated to the principal deity of the Bheel tribe of Mewar ‘Gauri’.The ‘Gavri’ was followed by an amazing dance form known as ‘Terah taali’ in which 13 brass instruments known as ‘Manjeera’ are tied on the dancer’s body parts such as waist, wrist, elbow, arms and one pair in hand. Terah means thirteen and taali means clap, this is the only dance performed only by sitting on the two legs, they strike the tied majeeras with the ones in hand in a synchronous pattern to create a rhythm, the synchronization and the precision in the dance were mind-blowing. 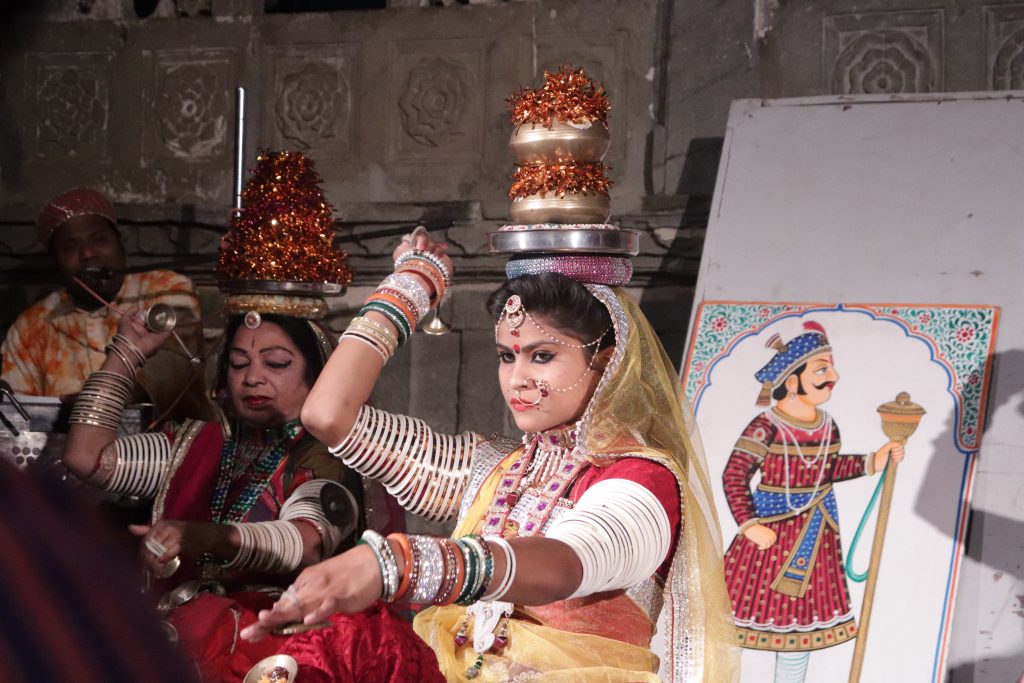 Next was the traditional ‘Ghoomer’ dance of Rajasthan where ‘ghoongat ‘clad women in ‘Rajputi Paushak’ performed the dance in a circle, the dance performances ended with the amazing Bhawai dance in which the dancer was a 60-65-year-old lady, the dance involves balancing certain number of earthen pots on the head and then dancing, the dancer also takes a step further by balancing herself on glasses or the rim of a metal dish. The lady in the show danced amazingly, she balanced 11 earthen pots on her head, and each time she increased the number of pots the audience used to cheer her. 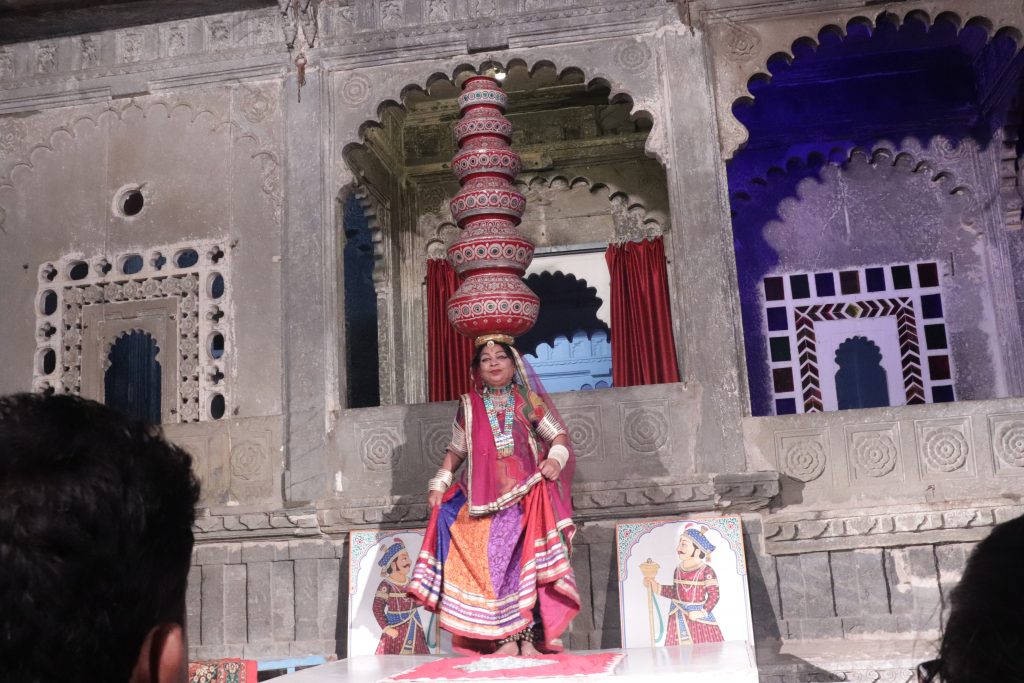 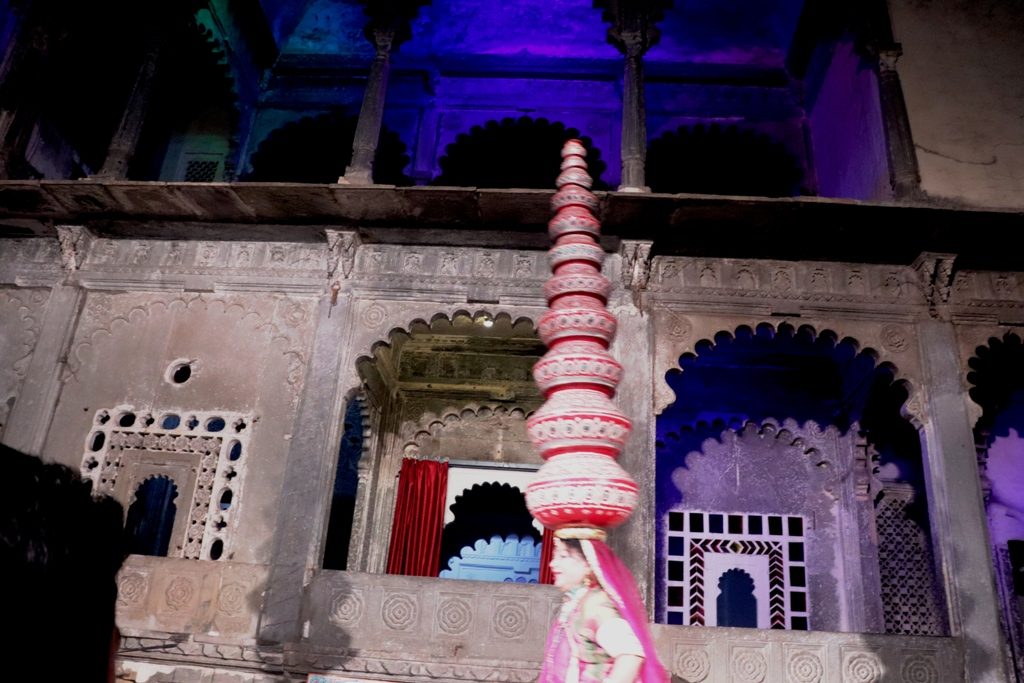 All in all this show is a must visit show if you are visiting Udaipur, this is the place where you will witness the rich art and culture of Rajasthan.

Also Read:15 Things to do in Udaipur[Updated Must Do List]

If you are in the old city Udaipur(the city palace area or nearby) you can reach ‘Bagore ki Haveli’ just by walking, it is situated just at the Gangaur Ghat, on the left-hand side overlooking the ghat and the Pichola lake.

Camera-INR 150(same for Indians and Foreigners)

You can watch the Dharohar Dance Show in the video below

Udaipurbeats tip- Reach at least around 6:30 pm to get a seat with a good view and opt for a seat in the front middle if you want to film or click the performances. Don’t sit too close in the front as you will have the difficulty in capturing the pictures. Please like our page Udaipurbeats Travel for amazing travel updates. 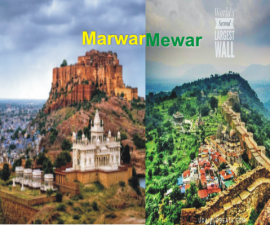 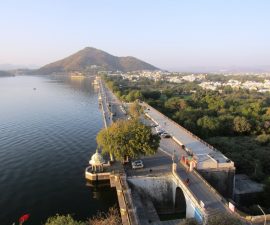 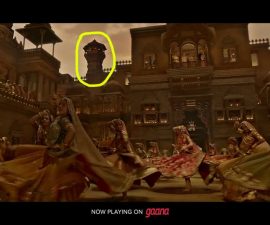